This appeal is now closed. You can still give to support our ongoing work to help vulnerable people around the world.

In what's said to be the worst rains in more than 100 years, over a million people have been affected by the unprecedented flooding in Kerala, southern India – with the loss of more than 400 lives during the monsoon season.

Kerala's floods and landslides have left ruin so terrible that around 200,000 people will be unable to return home for at least six months, Christian Aid estimates. Even among houses that were not completely destroyed, many are now filled with mud, vegetation and rubbish, with collapsed roofs and walls. Many people have lost everything they had.

Right now, Christian Aid and its local partners are on the ground responding to urgent needs of shelter, food and clean water for more than 12,000 people.

With your help, we can reach many more.

Please donate to the Kerala Floods Appeal, so that we can reach survivors throughout Kerala with essential supplies.

Our partners have been on the ground in Kerala since the beginning of the disaster and are continuing to respond.

Working alongside them, our team has been assessing people's needs, identifying the most vulnerable families, and coordinating the delivery of essential relief supplies.

We're providing, to 20,000 people across two states in Kerala:

By late September, we had completed our first phase of relief distribution. Our local partners IGSSS and CASA have provided 3,790 households with relief kits.

Through our partners, we have promoted good hygiene to around 16,000 families across two districts.

In the next phase of the response, we are supporting another 4,000 families in Idduki and Alappuzha districts with cash assistance, access to safe drinking water, relief kits, and cleaning and maintenance of wells, as well as livelihood interventions.

By early September, we had delivered 150 relief kits in the Idukki district. Nearly 9,000 people had benefitted directly from the relief kits we’ve distributed.

Nearly 4,000 people can now access safe drinking water, because water filters have been installed across 10 locations in Wayanad district.

A major longer-term concern is the loss of livelihood sources such as farmland, labour, crops, stocked grains, seeds, fodder, livestock etc. Many families have no other livelihood options.

By late August, we’d reached 10,000 people with emergency kits, and a further 2,000 with community water filters.

Our local partner PHIA has been fitting community water filter equipment, providing safe drinking water to around 300 families in Kakathod hamlet (Panamaram Panchayat) – with plans for two more community filters, and 350 more for household use.

PHIA is a registered local Indian NGO that is legally independent of Christian Aid, but part of the Global Partnership.

Who we're helping and where

We focused our initial response on supporting 20,000 people in the hard-hit Wayanad district in northern Kerala, and Idukki district in the centre of the state.

We are targeting areas where many people are considered to be 'Dalits' and 'Tribals' – among the most deprived and excluded in society.

Our humanitarian response was kick-started by a £77,000 grant from the START Fund, and £30,000 of our own funds. With your help, we can intensify our relief efforts.

We focused our initial response on supporting 20,000 people in the hard-hit Wayanad district in northern Kerala, and Idukki district in the centre of the state.

We are targeting areas where many people are considered to be 'Dalits' and 'Tribals' – among the most deprived and excluded in society.

Our humanitarian response was kick-started by a £77,000 grant from the START Fund, and £30,000 of our own funds. With your help, we can intensify our relief efforts.

Who are our partners

A tribal family of five – a married couple, their 2-month-old baby and elderly parents – lost their house in the landslides.

They were lucky to escape and climb to safety, but they can't go back; at present they've no other option but to stay in the relief camp.

Kerala's government is providing support in relief camps, and has announced that it's providing relief packages for the families – but it'll take some time for this family to receive that support, and return to a normal life.

Photo: A house (not the one described) lies destroyed during the floods in Kerala. Credit: Christian Aid

Ramakrishnan, from Ammara village, Pozhuthana Panchayat, told us that flood waters topped his family's drinking water well. Now they're drinking bottled water from relief camp, and  hoping for help to decontaminate their well:

“I, my wife and my two children were affected by recent floods and landslide. The water level was above this well in my house, which is a drinking water source for my family. Due to floods, the water of the well got contaminated and we are using mineral water bottles provided in relief camp. We are just waiting if some support will come for us to clean the well.”

Kurrmati, from Nattra colony in Thirunaly Panchayat, Wayanad District, told us that her house was ruined in a landslide.

She said the relief kit given to her by Christian Aid and IGSSS was really useful – and before they met her in late August, she had not received herself. Kurmati said that she especially valued the mosquito net (because there are lots of mosquitoes), and the tarpaulin it contained, which will help cover the roof of her ruined home.

She valued the relief kit, but also the fact that we sat with her, heard her story and shared her grief.

Soman, from Pullicunnu of the Lower Kuttanad area of Allepey, shows the devastation of the flood to his shop.

He used to earn around 1000 rupees (around 10 GBP) every day from the shop and without it, he can’t earn a living.

He's not married, and stays with his sister and cousins. “There is nothing left, and I am not sure how I will ever recover the loss. Now I am looking for daily wage work so that I can take care of my expenses,” he says.

Gracy, of Tirunelly village, Wayanad district, is thankful to Christian Aid for the hygiene and non-food item kit that was provided to her family:

“The water was about 5-6 feet high, so we lost many things. My cooking items, my husband’s construction tools were all taken away,” she says. “Out of the materials we received the bedsheet and the blanket has been very useful as we can sleep well and keep warm at night,” she says with a smile.

The pack Gracy received from us contained: 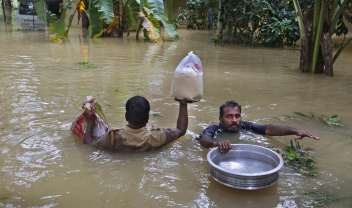 Christian Aid is responding to Kerala's exceptionally destructive and deadly floods with life-saving assistance for around 20,000 people who have lost their homes.
Read more

Emergency Appeal for those affect by Kerala floods 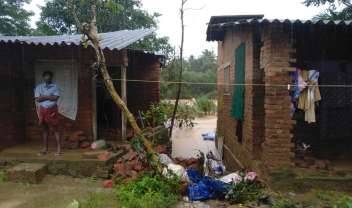 With more than a million people displaced by flooding in Kerala, Christian Aid has warned that more devastating floods in India will become the norm if nothing is done to tackle climate change.
Read more