On the frontline of the climate crisis

Boosting the income of rural families in Honduras

Last year, Honduras was rocked by back-to-back hurricanes and the coronavirus pandemic. The economic impact left many Honduran’s struggling to support themselves, leaving many contemplating the risky journey to the US as their only hope. Thanks to a Christian Aid supported solar energy project, women in rural Honduras are both being provided with an income as well as ensuring local communities are less reliant on cutting down trees to help light their homes.

Marlen Lourdes Salguero Hernández is a 37-year-old mother of four and lives in Belén, Lempira department, western Honduras. She used to make and sell clothes, as well as bread, jam and pickled vegetables to earn a living. Her husband owns half an acre of land where he grows coffee to sell. However, the couple struggled to make ends meet due to the destruction caused by devastating storms and the coronavirus pandemic.

In November last year, Central America was struck by back-to-back hurricanes, Eta and Iota, triggering flooding and landslides causing widespread damage. In Honduras, 4.5 million people were affected by Eta and Iota which killed nearly 100 people and damaged or destroyed over 70,000 homes and hundreds of roads. Marlen recounts that many families in her community lost their homes.

Climate change is contributing to the increased intensity of hurricanes in the region. Hurricane Iota was the second strongest November storm and Eta the third strongest to have occurred in the Atlantic on record, and it was the first time that two such storms made landfall so close together in time and location at that intensity.

Climate change affects the crops. If it rains a lot or if there is drought or the temperature is too hot or cold, it damages the crops. My husband lost half his coffee farm due to strong storms.

Marlen added that extreme weather as well as the coronavirus pandemic only made things worse for her family. Roads and bridges left damaged by storms left many communities cut off and made it difficult for her husband to travel around to different villages to try and sell his coffee. The local economy was also impacted by lockdown, introduced to prevent coronavirus from spreading, with people choosing to spend what money they had on food rather than on other items.

On such a low income, Marlen’s family were not earning enough money to get by and like many others in her community, she found herself weighing up the tough choice of emigrating to the US, as many families are forced to do.

“People here migrate a lot due to climate change and unemployment. When this project started, I was about to move to the United States because I felt that I had reached the limit, I could not continue,” Marlen says.

“When someone migrates, they risk everything, their house, their life. The ones who stay behind suffer thinking about their family members. The children are left alone with other people while others are forced to send the children to work in order to afford beans and rice to survive,” Marlen adds.

Through the EU-funded Breaking the Barriers programme, Christian Aid aims to boost the income of women living in rural areas by helping them to gain employment in the sustainable energy sector. Through Christian Aid’s local partner Organismo Cristiano de Desarrollo Integral de Honduras (OCDIH), Marlen was one of 120 women who received training on how to install solar panel systems.

Through Breaking the Barriers, Marlen was able to access a low-interest loan to help her kickstart her own sustainable energy business, Belén Solar, by helping her to buy solar panels and installation equipment as well as to refurbish a space to house her business.

The business, which also employs two other women, has helped Marlen adapt to the challenges of climate change whilst also earning a better living. To date, Belén Solar has installed nearly 40 solar energy systems, mainly in houses in small villages.

For Marlen, the switch to solar energy provided the key to a number of challenges. It was cheaper, it meant less deforestation as fewer trees were being chopped down to help light people’s homes and also meant the air was cleaner, reducing the risk of breathing problems from inhaling smoke.

“Many families have benefited. They previously used ocote pine as candles to provide them with light, which is a problem because it causes respiratory problems, but now they have their solar system,” Marlen adds.

In addition to helping people to switch to cleaner sources of energy, Marlen also uses the installation process as an opportunity to better educate people about the impacts of climate change and the steps they can take to do things differently and help better protect the environment, using information they have received through training from OCDIH.

“What we are trying to do through Belén Solar is spread the message to recycle, to use natural resources carefully, and to reduce the burning of forests,” Marlen says.

“We also try to reduce water contamination due to washing coffee. Mosquitos increased from the contaminated water. It occurs when people throw water and coffee residues away. The mosquitos breed on this. Every time we install an energy system, we take this message to the communities and we educate them,” Marlen says.

Get involved in COP26 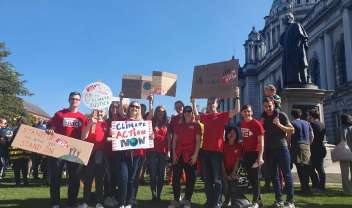 Join us to pray and act for climate justice

As world leaders meet in Glasgow for the UN Climate Conference, COP26, this is a crucial moment for individuals and churches to pray and act for climate justice.
Read more

We'll use your donations to help families around the world to overcome poverty and injustice, wherever the need is greatest.